The Australian Stock Horse is a working and performance horse that evolved through selective breeding in response to the demands of the Australian environment.

It is truly "The Breed for Every Need," achieving outstanding success in a wide variety of sports including:

The prerequisites of high-level performance horses are a quiet temperament, intelligence, trainability, and athletic ability.

The Australian Stock Horse displays all these qualities. 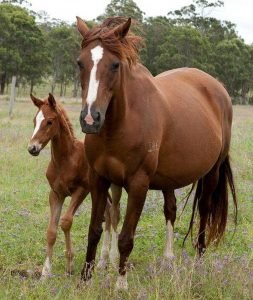 The breed began with the arrival of horses with the First Fleet to Australia in 1788.

Originally, these were of English thoroughbred and Spanish stock. Later, Arabians, Timor Pony and Welsh Pony breeds were imported.

Horses for the Colony needed strength and stamina to survive the long sea journey and work in the harsh environment of their new home.

Despite the mixed origins, these horses developed into the strong and handsome type that we ride today. The hardiness of the Australian horses made them a natural and often preferred mount for the cavalry.

Initially they were used by British troops during the Indian Mutiny; then in South Africa they served in the Boer War, in particular seeing action in the Siege of Elands River Post and the Battle of Onverwacht.

Probably the horses most famous battle was in what is described as the "last successful great cavalry charge" against the Turkish forces at the town of Beersheba, in (then) Palestine.

On October 31, 1917 the Australian Light Horse attacked with such speed and ferocity that the defences were overrun and the town, with its vital water wells, was secured for the allies.

English cavalry officer, Lt. Col. RMP Preston DSO, summed up the Australian Light Horse in his book The Desert Mounted Corps as follows: "The majority of horses in the Corps were Walers and there is no doubt that these hardy Australian horses make the finest cavalry mounts in the world." 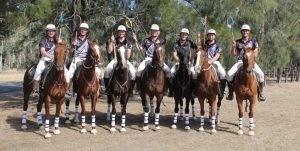 At the Opening Ceremony of the 2000 Sydney Olympics the Australian Stock Horse took centre stage and billions of TV viewers learned the remarkable history of this living icon.

The Sydney Olympics fuelled a dream to develop the sport potential for the Australian Stock Horse so that horse lovers nationally and internationally can enjoy "The Breed for Every Need."

Advertisements are accepted in good faith but do not imply any endorsement of the product or service by ASHS NZ Branch.

Reach visitors from throughout NZ and abroad with our classified ads.
We are pleased to offer this free service to members and horse-related commercial interests.